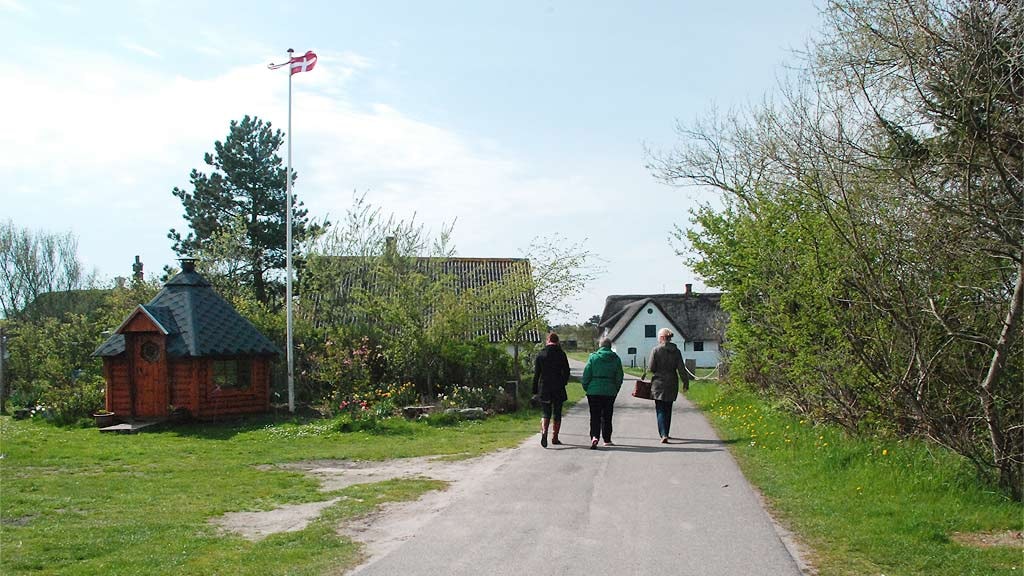 Mandø on your own

We recommend a trip around Mandø city on your own, and after the trip the beautiful and special nature of the island can be explored, either on foot or by bicycle.

You may want to start your town walk in Klithus Mandø by viewing the Nature Exhibition about Mandø and the Wadden Sea. This exciting exhibition shows the history of the island, its nature, the many storm surges, the dikes, the incredible bird life and how people lived on the island then and now. Admission is free. The exhibition is open during the opening hours of Klithus Mandø.

Following the trail leading past the old Rescue Station, you will reach the high dune, which is the island’s vantage point towards the west. From here, especially at the sunset, the view across the sea and the waddens is breathtaking. Below the dune you will see the storm surge column, which commemorates the water level during the 1634 storm surge, the worst in the history of the Wadden Sea. This storm surge destroyed the town on Old Mandø, and the islanders prudently moved to the 10 metre high dune, where the town lies today.

The Rescue Station is owned by Mandø Museum and functioned as a rescue station from 1912 to 1961. It contains a handicraft and souvenir boutique, which is open during the tourist season. Across from the Rescue Station stands a commemorative stone to Queen Dagmar who, according to an old folk ballad, set foot on Danish soil here in 1205 for the very first time.

Now, turn right on Vestervej and then left on Mandø Byvej at the first intersection. A few metres from LokalBrugsen and the stop for the Mandø bus, you will find Mandøhuset, an old sea captain’s home, built around 1831, that now functions as a district museum.  Mandøhuset - Mandø Museum stands exactly as it did when it was built and is mostly furnished so it looks as though the captain’s family just left momentarily. The east part of the home contains changing exhibitions such as the history of the rescue service, or beach wrecks on Mandø and plane crashes during WW II. The museum also contains the island’s local history archive. The museum, which is run by volunteers, has opening hours that coincide with the busses and their arrivals and departures on the island.

Now turn right going south where you will find the tower-less Mandø Church, a four-nave building made from large medieval bricks, which can be dated to 1639 (restored in 1727) with a west of porch from 1792. The porch has two main doors, either one used depending on the direction of the wind. West of the church stands the bell frame that was erected in 1939. The church is equipped with four ship’s models in remembrance of the many islanders who were seamen.  The altarpiece is a copy of Joakim Skovgaard’s painting Jesus leads the Thief into Paradise. The original is now located in Copenhagen. The pulpit came from Ribe Abbey in 1826, and there is a Romanesque baptismal font made in granite. As well, the 10,000-year-old reindeer antlers once used as hat pegs. The church and the cemetery are situated on a terp in order to be sure during the high tide.

Now, walk back and go past Mandøhuset and further along Mandø Byvej. In the northern part of town you will find Mandø Kro. This small Inn was built before 1900, originally the town hall, but was later rebuild as an Inn with a restaurant and rooms. It has been remodelled several times, but always in the original style. It serves good Danish meals inspired by the local area.

The last stop is the town’s landmark, the mill, which can be seen from the Inn. The old Mandø Mill, a Dutch windmill from 1832, has functioned as a mill up to the WW II. The restoration, done between 2008 and 2009, maintained the mill’s early look and function and reused original parts. Today, the mill is fully functional and can mill grain. Visit the little store inside the mill. All profits go to the mill in full.

Having taken this little Mandø town tour, you are now ready to make the acquaintance, by hiking or biking, with the island’s unique flora and fauna.

Låningsvejen
A walk along Låningsvejen is an intense experience where you are at eye level with the sea and the open marshland.
The trip is 6.5 km.
Remember to always check the tidal table, and that all traffic is at your own risk.

Mandø Ebbevej
A walk across the dry seabed on Ebbevejen is a step closer to nature. Ebbevejen is marked with rice brooms.
The trip is about 5 km.
Remember to always check the tidal table, and that all traffic is at your own risk.